Well I had good intentions of posting at least once a week to record  my work through 2015, but it just hasn’t happened. Frankly the process of making has been more important than the recording and broadcasting of what I have made or taught people to make; it has been 6 day weeks since New Year.

So on the cusp of the half term holidays and with tools on the shelf for the weekend I am making up for my lack of posts. The first is a follow up to the discussion of the local to Ely potato harvesting basket that I was commissioned to make from analysing remnants of two originals. Here are some super examples that were on display in Ely Cathedral in October 2014 for their Harvest Festival. Complete with waxy dummy arm (no it’s not mine) putting potatoes in the cob. They are made in cane and have wire bases to allow soil to fall out. 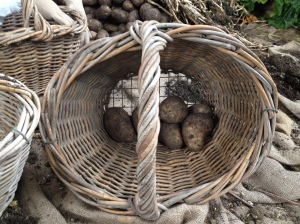